Hey Lori: BLOODSTOP – A NECESSITY FOR EVERY FIRST AID KIT 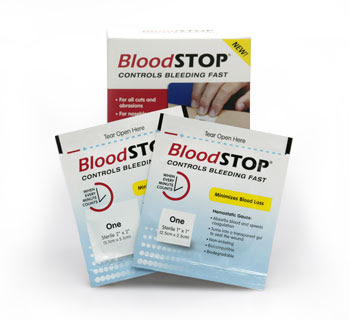 What do you use to stop the bleeding when you get a cut? If you are someone like me, you bleed a lot even when it is a little scratch.  MH is the same way whenever he gets cuts on his arms and was the perfect guinea pig for our newest test product – BloodSTOP.

BloodSTOP is supposed to stop bleeding faster and promote healing better than traditional bandages and other blood coagulating products. It has been used by emergency workers, medics, firefighters, and police forces. The advantages include:

It just so happened that MH had gotten his arms bleeding once again while going through briar patches.  He had blood all over his shirt and jacket.  I hate that because it is so hard to get the stains out.  I washed off the scratches and placed a small piece of BloodSTOP over the wounds.  It instantly stopped the bleeding, unlike bandages, that let the blood continue to run.  MH pulled it off a while later and it started bleeding again.  I told him to leave it on and wash it off the next morning while in the shower.  He did that and there was no more bleeding.  I have since placed this in his first aid kit that he has in his truck.  I’m sure I will be replacing this often since he is always doing something to cut up his body.

This product is perfect for families, especially those with young children.  You can purchase BloodSTOP at stores nationwide, such as CVS, Walgreens, Rite Aid, Walmart, and online at Amazon for about $13.98 for a 10 count box.  Find out more online.